The Seabirds rescue program, run by the association MANU, consists in communication and awareness-building initiatives as well as the coordination of a volunteer rescuer network. Seabirds in distress are taken in and nursed until they can be set free again. We are mostly dealing with grounded Petrels and Puffins lured by the city lights. Photo Jean KAPE

Your fund a bird

It is classified as vulnerable (VU) on the IUCN

Although the species is not threatened, it is close from being so for several reasons.

The species is classified as “Least Concern” (LC) on the IUCN Red List.

Petrels and Puffins nest at high altitude within the high islands of French Polynesia. They dug burrows in unconsolidated soil or nest below ground-level crevices between rocks.
They spend all day fishing on open sea, only returning to their colonies at night.
The main threat to these species is the introduced mammals’ predation, especially by rats, feral cats, dogs and pigs that occupy the nesting areas. Moreover, another menace has been identified in Tahiti for about 20 years: the light pollution. Indeed, the nocturnal activity of Petrels and Puffins taking place on land, they are very sensitive to lights. When the fledglings take flight for the first time, they tend to be attracted by the lights coming from the ever-growing urbanized areas nearby, instead of heading to the sea. Some of them will fall on the ground and be unable to take off again. Then, they either starve to death, die from injuries caused by the fall or from the predation by cats and dogs.

However, most of the time, they would only need a little help. Struggling to take off on their own from a flat surface, they usually regain their liberty quite easily if released by the sea.
This phenomenon affects 4 tahitian species, but most of the seabirds found aground were Tahiti Petrels.

The role of a volunteer rescuer is very simple and doesn’t take too much time.

Please download the Guide du sauveteur to know more about this action (sorry, in french for the moment).

No attachments were found. 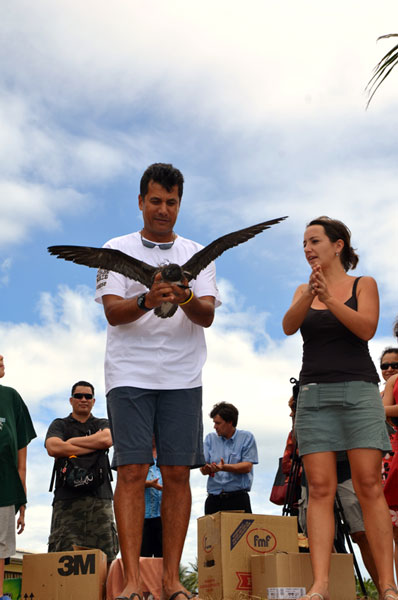 Inspired by actions led in Reunion island and Hawaii, the Polynesian Ornithological Society (SOP) has set up a rescue strategy for Petrels and Puffins in Tahiti since 2012.

When a bird in distress is found, the population informs a member of the « rescuers network » who takes it in.
From there, the approach is the following :

Since 2012, thanks to the financial support of several sponsors, we were able to expend and improve this rescue program, organizing a number of communication campaigns. They involve communication media distributed throughout the whole island, newspaper articles, radio and TV interviews and reports. Moreover, the SOP gives numerous school-based presentations as well as general public conferences, occasionally followed by the release of rescued seabirds.

These initiatives helped constitute a network of volunteers, who have been trained in the field to handle and release seabirds.

Awereness-raising events extend to the islands of Moorea and Raiatea, dealing with the same issue.

Thanks to the communication actions and the functioning of the network of volunteers “rescuers”, hundreds of Petrels and Puffins are recovered each year by the association, treated when necessary, and then released into the natural environment. In addition, data collected during bird rescues provide valuable information on species and the impact of light pollution.